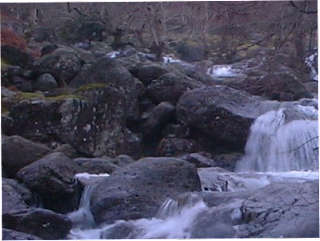 The streets of Durholme weren’t normally the most pleasant of places to loiter on a Saturday afternoon. Actually, if you asked anybody who had the misfortune of living on them (That is, living on the street as opposed to in a house to one side) they would tell you most days were pretty rank. Today was by no means an exception, and gave a new meaning to the turn of phrase ‘putting the turd back into Saturday’.

Moll Dee wandered straight down the middle, or at least as straight as you could be without putting your foot in it. And we’re not speaking metaphorically here, mind.

Today was hot, and it showed, in a flamboyant and vibrant sort have way. The city’s wine tasters wouldn’t be mistaking this scent for ‘a field in the height of a summer breeze’ unless of course that field had been subject to slurry spreading moments before.

People often wonder just who it is who craps on the floor in public privies, but today those people would be putting their wonderings to good use in pointing the accusing finger at the miscreants who were leaving their marks on both cobbles and shoe undersoles. Moll Dee was wondering too, if only as a direct result of standing in a particularly squishy pile.

Her eyes had noticed it a clear few seconds before impact was made, but they had trouble red flagging the brain, which was miles away in deep thought leaving an inferior deputy neurone to see to the automatic pilot.

Obviously this neurone was fresh out of neurone training school and hadn’t quite got the hang of the controls yet.

She stopped to look down at her foot. Brown goo dribbled lazily off. Although she suspected his ears were adding artistic licence to the squelchy splatting lumps were making as they fell, she couldn’t be sure and wasn’t in a ‘let’s investigate this’ kind of a mood.

The pile had looked like the kind of brown mister whippy with suspicious lumps in, but was now definitely giving off the flat undercooked chocolate(ish) pancake vibe.

“Oh Crap,” she exclaimed, “What the hell are all these little Molehills doing on the road. Anybody might think the Moles wanted people to stamp on their homes.”

A tap on the shoulder disturbed her rather ropy train of thought, and she spun round to meet the gaze of the one who had dared to brave the smell of Carbolic Soap and allow Moll Dee to enter his reality.

“Now then, what do you think you’re doing young lady? You’re holding up the traffic and it is the rush hour, you know,” began Squaddie Dribbler MacBunion.

Squaddie Dribbler MacBunion wasn’t exactly a possessor of the quickest of minds at the best of times. Let’s face it – paint could dry faster. But in fairness, ‘Cabbage’ wasn’t exactly in the list of expected replies to this particular question.

Dribbler’s braincell came dangerously near to overload as it mulled the reply over.

“Cabbage?” he repeated slowly, as if this might help recognition back off holiday. Carefully the thought was slipped into the lunch suggestions box.

“Too much these days in young people’s diets. Makes them fart all the time,” continued Moll undeterred, “That’s the route of all evils. When I was here last, it was bread and dripping – now that was the way to keep your digestion from backfiring.”

Dribbler fought the primordial Police instinct to arrest and beat three shades of crap before pursuing a line of questioning, and instead sidled off into a sidestreet as Moll rambled on, oblivious. The single braincell, overheated from the exertion decided this was a better option than to try and probe the woman’s mind further.

It was a further four minutes of hard talking before she realised she had no-one to talk to. Undeterred, she rounded the conversation (or monologue, if you wish to be precise) in less than two further minutes, and bimbled once more along her way.

The world, realising she was coming, mysteriously got out of her way, leaving a rift in the space-time continuum through which she passed. Other unconfirmed tellings of the story merely put this down to the fact that Moll was a ham-fisted two-left-footed git, who had a habit of breaking all that she touched, but we digress.

On the way she found herself taking in the sights and sounds and smells of the city that she had left behind so many years ago. She passed the Red Warlock and the Greedy Goblin (Purveyors of alcoholic beverages to the paint stripping industry) and mused in her own private reverie of the happy times she had spent climbing in and out through the privy windows to avoid the watchful glare of the Ogres who didn’t take kindly to the in-depth discussions to the merits of underwear lore. No matter.

By the doorway to the Goblin she hovered a moment, debating whether to go in and see whether they’d got the usual ready supply of piss in a glass and river water on tap, but then she remembered that she hadn’t missed them in the last four years so hurried on.

Making a quick left and a right she passed the smoking remains of the Alchemist’s Guild, and couldn’t help shed a private tear at the memories of the times she had spent here with Boomer, her former husband.

“Well,” she mused to herself, “he went out as he would have liked – with a bang.”

She took a step, then added for her own benefit, “He also managed to pull the largest splits that a Kender ever managed. He would have liked it that people remembered him for that.”

Turning into the familiar lane, she felt the emotions rise higher and higher as she came to the gated entrance to the Scout’s Guild, a home from home until she had left the city.

A large businesslike man politely but firmly barred her way.

“’Ere. Have you got an appointment?” he demanded sternly.

Moll adjusted her corset. It should be noted that this garment on any other female might have had the effect of a bookshelf ready and waiting to support mighty volumes. But on Moll the effect was more akin to a spice rack. A small spice rack where you have to carefully balance the nutmeg so as it doesn’t wobble off. Still, work with what you have Moll always said.

“No.” she smiled sweetly.

“Well bugger off then.”

He made to slam the door, but it didn’t. Confused he looked down to find a foot inserted in it. A foot that was attached to a Moll Dee.

“Couldn’t you make an exception for little old me?” she purred as sexily as she could, stroking his tabard.

“Rules are there to be broken.”

He gave the foot a kick. It moved at the last minute, and he found himself in his own private world of pain as his toes made contact with the iron hinge.

Moll smiled innocently as he turned an interesting shade of purple. For a moment his eyes looked like they were about to pop out on stalks as he struggled to contain the words he would have liked to say.

“Oh dear, how did that happen?” she said innocently. “Here – let me help you sit down.”

Before he knew it he was inside the guild building – and so was the strange girl.