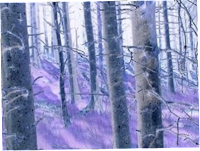 In the sanctity offered by his own quarters high up in the towers of Palladin, Stoto turned his grumbling attentions to the task he knew he had to be quick in following. First making sure the heavy studded oak doors leading in were securely bolted and barred, he began the scrabble through his misfit collection of potion bottles and gnarled books as withered with age as he to find what he wanted.

Checking the names across the spines of books on the tall shelves along one side of the first room, he found the one he wanted and tugged it from its resting place. A crooked finger flicked along the pages scattering dust as his mind muttered and schemed, still boiling at the inconvenience and lost opportunities of Jono’s new plans.
Well he would pay them back! A smile cracked across his face at the thoughts and at last his fingers found their mark. Hidden in the pages were hand written notes in his own scrawny handwriting, illegible from the prying eyes that fate might tempt to look over his work whilst he was elsewhere in the palace. The High Priest had always been suspicious of him, and he suspected that there were others too who would dearly love to pay him out. He cackled as he surmised that none had come close to exposing him at all.
Sidling to the end of the dusty volumes with the book balanced on one arm, he thrust his other into the darkened recesses behind the shelves, and struggled for a moment with concentration etched to his face. Then his fingers found their mark, and the bookcase edged silently open revealing the dark void behind and the hidden room that no-one but he knew of. The shelving was well-balanced on its base, and it made barely a sound as it moved. Still, he gave a cautionary glance to the barred oak door, reaching out across the ether to sense any other minds that might be trying to spy on him.
Satisfied there were none, he picked a spluttering tallow candle from its holder in the wall and stepped on through to his most secret of hiding-holes.
Water trickled and dripped echoing hollow in the gloom. Here and there, illuminated in the brief passing of the flickering candlelight, cobwebs strung out like so many intricate lace patterns shuddered silently to the breeze that blew through the cold passage. Ignoring the suprisingly loud rattle of his own footsteps in the tight confines, Stoto pushed on to the end of the short tunnel where it opened into no more than a small room, buried deep and safe within the thickness of Palladin’s old stone walls.
Setting the candle to a rusted holder he turned his eye over the materials set out in the dusty grasp of age darkened shelving. His equipment was still here exactly as he had left it. It had been a while since he had felt the pressing need to use it, but that time had predictable been long in coming. His hands stole over the casings of complex off-world electricals. Jono and his people had never been ones for technology, invariably choosing to let it all pass them largely on by unnoticed.
That was not to say that it was impossible for those determined enough to gain possession of whatever they desired. There were always smugglers within the depths of spaceport bars willing to bring anything into orbit for the right price.
He flicked on a power switch, and hoped there was still enough juice left in the power cell to do what he wanted. Waiting for old electrics to warm up, he cast his mind out one last time on the ether to probe for anyone seeking to spy on his work. Like white horses on the crest of waves on the sea his consciousness floated and weaved its way over rooms and through walls until he was satisfied that no-one was near. Then, opening his eyes he saw in the warm glow given off from the machine that the time was ready, and leant forward to operate the controls.
* * * * *

The air above the machine exploded into an array of shimmering light. Somewhere in the box electronics hummed, as the drain on the power cells grew ever stronger. The smell of ozone and ionised particles hung heavy in the weasel man’s nostrils, though he never flinched in the harshness of the glow. In mid air patterns of haze slowly resolved and formed until the very molecules of the cloud took on form and gained the personality and features of something else.
A line of static wavered in the image for a moment, causing Stoto to hurriedly reach for control knobs and adjust. Silently he cursed himself for not sourcing new cells after the last time he had had cause to use the machine. It was too late now for such regrets and all he could do was spin the dials and hope for the best.