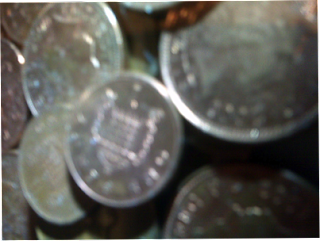 I always love train travel. Sitting by the window, watching the World slip by without a care. Looking down I see something bright on the floor. What is it? Bending down I spy a penny, shiny and well used. I pick it up and turn it over in my fingers. Gosh! It was minted twenty years ago. As the trees and countryside slip on by, I begin to wonder what travels this penny has had.

I begin to daydream. A fresh new penny straight from the bank. First in a man’s change from a newspaper, then on to his son as pocket money. Treasured for a week it goes out to the shops, and the son agonises over what sweets to buy. I bet it bought a lot back then.

Back to the bank at the end of the week, the penny does not stay there long, onwards out with money withdrawn.

“Got change for ten pence? The machine wants exact change,” says a colleague, and out comes the penny with nine others before being pressed into a slot and swapped for chocolate.

Later on a collection tin, rattling on a street corner takes the penny away. From there it is a short hop to the pocket of a worker, heading back overseas from a stay in the city. What a journey to make; well travelled the penny jets through the night. Jangling in a pocket it meets with dollars and rupees. In a jar in far-flung lands it eventually sits, waiting a time when some-one will take it home. Watching lizards and mosquitoes climbing the glass.

Back on a plane, heading home again now. Via New York and Detroit, listening to the bustle of the big Apple through the fabric of cheap jeans. Then on to Heathrow, and becomes change at long last for a cup of hot coffee.

On familiar ground the penny eventually finds its way to a payphone slot and drops at the pips for a long distance call to be made. Lovers talk, and the penny is on its way.

Back to the bank, several more times. Through pockets of people of all shapes and sizes to be awarded as change when a pound pays for ninety-nine pence, then on again in exact change and away.

Finally back to a ticket window on a station somewhere.

And the in the change the penny is away again. Dropped by clumsy hands in the motion from the station, it’s only a penny and it is left on the floor until I come along.

“Anything from the trolley?” asks a voice.

I see a chocolate bar, and with other coins from my pocket the penny is on its way. Spent you.